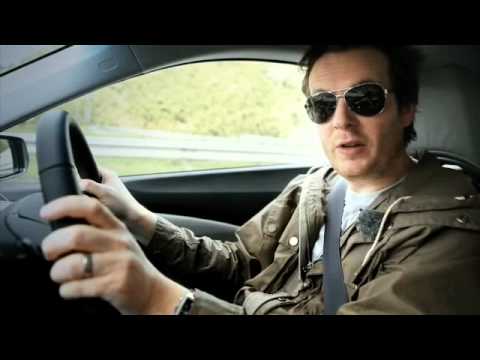 Motoring journalist and broadcaster Jason Barlow takes the CR-Z on a mystical journey of discovery in Japan.

Ready to try the CR-Z out yourself?
Book a test drive at: http://www.honda.co.uk/cars/bookatestdrive/

So this is the Honda CR-Z, or ’zee’ as the locals insist on calling it. A sporty coupé that’s a hybrid. It’s the car that I guess car enthusiasts have been waiting for, rather than being made to drive a car that looks like a kind of little spaceship or a really boring-looking hatchback. Finally we have hybrid technology wrapped up in a shape that’s quite interesting.

And it is an interesting-looking car. In fact, car designers talk about a thing called DRGs, which is ’down the road graphics’ — you might want to make a note of that so you can impress your friends in the pub later — and this car’s got terrific DRGs. It looks good in pictures but you need to see it in the flesh, really.

And as for how it actually drives, well I’m hugely impressed. And I’m impressed with things I didn’t expect to be impressed with. It’s not a particularly powerful car — it takes more than ten seconds to do 0-60 — but the whole point about the CR-Z is that you have to kind of recalibrate what you expect from a car. It’s a sporty car but not necessarily a sports car.

It should have a fairly high feel-good factor, and of course it only chucks out 117 grams per kilometre of CO2. So there’s a feel-good there if you care about that sort of thing. Which obviously we we all do.

One of the other measures that car engineers will wibble on about is NVH — that’s noise, vibration and harshness. I’ll be honest — I thought this car was going to have a bit of a problem in those areas but its NVH is really very, very good. It means you can drive along on a motorway at 70 or maybe 80 miles an hour perfectly happily. It’s surprisingly refined.

I’ll tell you what, they do do wonderful scenery in this country. But they also do traffic jams like you would not believe. Think new head-spinningly painful places of (yells). Never known anything like it. Not even on the M25.

But you don’t get this sort of stuff on the M25, do you? Doesn’t look like this around Rickmansworth.

Last time I checked, we were driving through the Japanese countryside. We’re in a place called Kikugawa — look what we’ve found! Some 1930s Ford hotrod. All manner of knackered old toot there. And then weird pink Japanese van. That’s what I love — weird random discoveries like that.

When you’ve been driving for as long as we have on this trip — we’ve been nailing it — so I’ve spent a lot of time in this car. It’s become a second home. And never, at no point at all in the proceedings have I walked towards this car and thought ’I really don’t want to get in this thing again’.

I’m comfortable in it. It just feels — has a kind of friendly quality to it. The central pod here has the rev counter round the outside and this kind of pulsing orb in the middle that projects your speed. If I go into Economy mode, it changes colour!

There’s another thing you get when you get into a car that you haven’t driven before, and all cars communicate this — it’s just that sense of structure and solidity and kind of integrity. And this car really has it, actually. Again I didn’t really expect that because the Insight doesn’t feel really solid enough. This has moved it on quite a few leagues, it’s much better. It feels like a really well-resolved, solidly engineered little car.

We must’ve done close to 2000 kilometres driving in the last 3 or 4 days. It does turn heads. And it does kind of fit in this country. You see a lot of stuff over here that we don’t get in Europe, and the CR-Z does cut something of a dash. You can see it for yourself, you can decide whether you like it or not, but I’ll say this for the CR-Z — I think it works."